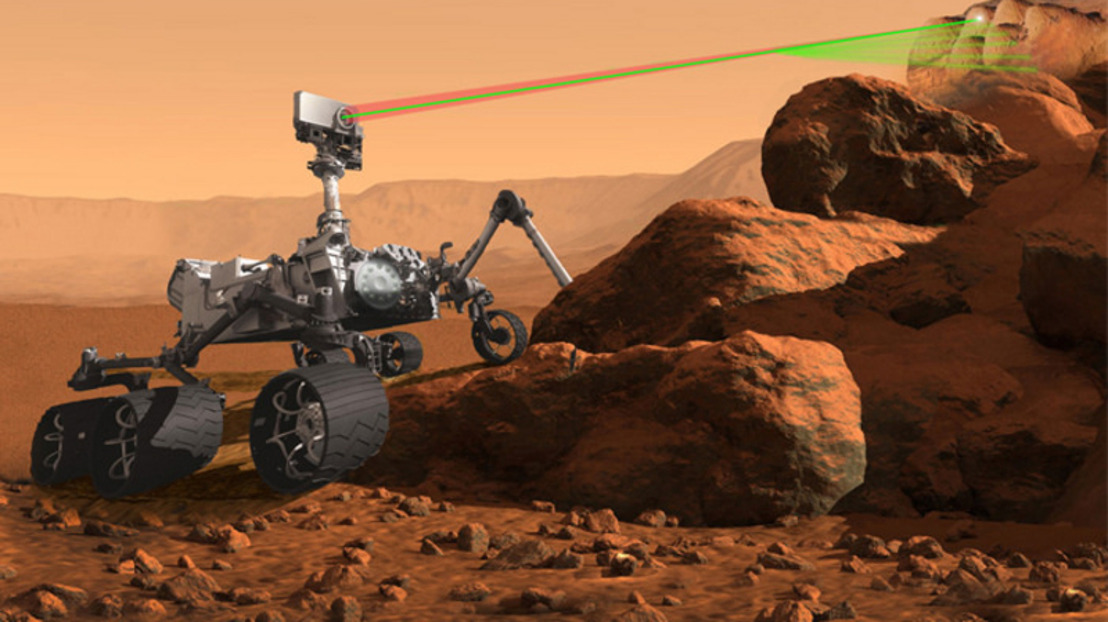 On 18 February, the Perseverance rover — a key component of the Mars 2020 mission — will touch down on the Red Planet after a long seven-month voyage. SuperCam, one of seven strategic onboard instruments, is a powerful combination of technologies designed to analyse, characterise and select Martian rock samples. SuperCam is the result of close collaboration between Los Alamos National Laboratory (LANL) in the United States and the astrophysics and planetology research institute in France (IRAP, CNRS / CNES / Université Toulouse III - Paul Sabatier), with contributions from the University of Hawaii and the University of Valladolid in Spain. The Mast Unit, the French part of SuperCam located at the top of the rover’s mast, was designed and built by a consortium of French laboratories1from CNRS, universities and entities under the scientific lead of the IRAP team and under the responsibility of CNES, the French space agency. The laser supplied by Thales is a key part of the Mast Unit.

In 2012, Curiosity landed on Mars equipped with the first high-power laser to operate on the surface of another planet, a laser designed and developed by Thales for the ChemCam instrument. The ChemCam laser has been operating faultlessly for over eight years and has fired close to 855,000 shots to date as Curiosity has made its 24-kilometre trek across the surface of the Red Planet. Data from ChemCam has already helped to prove that conditions on Mars were once suitable for microbial life.

The SuperCam instrument, a new and more powerful version of ChemCam, is designed to take Mars exploration to a new level. Like ChemCam, the SuperCam laser will use an infrared beam to heat material to a temperature of around 10,000°C and vaporise it — a method called laser induced breakdown spectroscopy. Coupled with a special camera, this makes it possible to determine the chemical composition of Martian rock samples by measuring the colours of light in the plasma created.

Unlike ChemCam, however, the SuperCam laser can also emit a green laser beam, which will help determine the molecular composition of surface materials. This green beam excites the chemical bonds in samples and produces a different signal according to their various linked components. This analysis technique, known as Raman spectroscopy, will be tested for the first time on Mars and will enable scientists to detect any markers of life. The green laser will also be used to induce fluorescence in mineral and organic compounds, allowing scientists to determine their constituent components with greater accuracy.

“We’re proud to have provided NASA with the first two lasers to operate on Mars. The Mars 2020 mission is a decisive step forward in the study of the Red Planet and preparations for future expeditions. SuperCam, the ‘eyes’ of Perseverance, is the result of close collaboration between partners across the international scientific community. Thales's SuperCam laser delivers unrivalled performance and will enable Perseverance to perform its exploration mission throughout its time on the surface of Mars.”Christophe Salomon, Executive Vice President, Land and Air Systems

The goal of the Mars 2020 mission is to study the Red Planet’s surface, search for signs of past life, take rock and dust samples at selected sites and store them for retrieval by the future Mars Sample Return (MSR) mission, which will be conducted jointly with the European Space Agency. Thales Alenia Space is closely involved in the MSR mission.

The Mars 2020 mission is designed to gather the necessary knowledge and test the technologies that will be vital for future human expeditions to the Red Planet.

How to produce oxygen from the Martian atmosphere? What resources are available? Is there water beneath the surface, for example? How to improve landing techniques and characterise weather conditions, dust levels and other environmental conditions that could affect the life and work of future astronauts on Mars? These are just some of the questions the Perseverance mission will seek to answer.

For more than 35 years, Thales has been a world leader in design, development and manufacturing of high energy nanosecond lasers for industrial applications and the most powerful ultra-short Ti:Sa femtosecond laser systems for leading scientific applications with peak power up to 10 petawatts. Thales provides the most reliable and easy-to-use products, a unique combination of technological expertise and robustness for implementation into industrial applications that require highest availability such as laser annealing, laser lift-off, laser shock peening  and cutting of composites for various industries such as aerospace, microelectronics, flat panel displays and many others. Thales provides also a full range of services, which are optimized to support each customer.