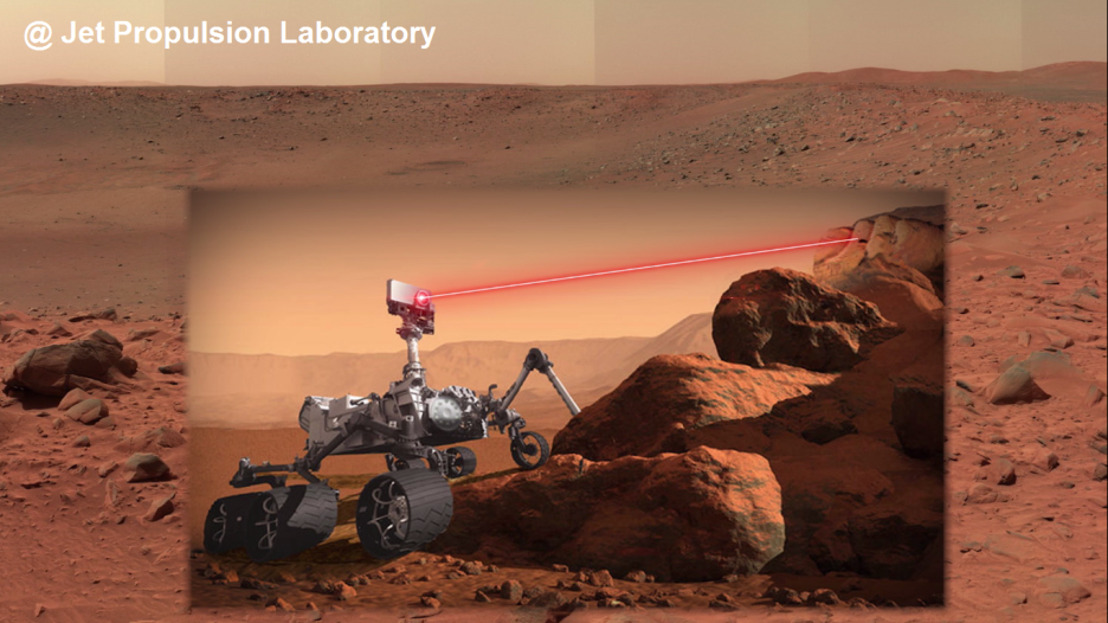 • Just days after the Perseverance rover landed in Jezero Crater, the SuperCam instrument has successfully fired its laser for the first time.

• The Thales laser, designed to operate in both LIBS and Raman modes, will analyse the chemical and mineral composition of samples and detect organic particles — key aspects of the Mars 2020 mission.

The Thales laser: a key technology for Perseverance

After a journey of 293 million miles (472m km) through space, the Perseverance rover landed safely on 18 February with incredible precision — at the exact scheduled time — in the heart of Jezero Crater, a 30 mile (49 km) wide impact basin.

The touchdown was a crucial milestone in the ongoing study of the Red Planet and was especially poignant for Thales’s laser teams.

SuperCam is the result of close collaboration between Los Alamos National Laboratory (LANL) in the United States and the IRAP astrophysics and planetology research institute in France (CNRS, CNES and the University of Toulouse III – Paul Sabatier), with contributions from the University of Hawaii and the University of Valladolid in Spain. The Mast Unit, the French part of SuperCam located atop the rover’s mast, was designed and built by a consortium of French laboratories[1] attached to CNRS (the French national scientific research centre), universities and research facilities under the scientific lead of the IRAP teams and under the responsibility of CNES, the French space agency. The laser supplied by Thales is a key part of the Mast Unit. It was designed, built, assembled and tested at the Élancourt site in France.

The teams at the French Operations Centre for Science and Exploration (FOCSE) at CNES’s field centre in Toulouse received the first data from SuperCam and have confirmed that the instrument is in great shape.

Designing a laser for Mars

Designing the SuperCam laser, which weighs just 500 grams, was no mean feat for the Thales teams because, while keeping the same volume as the ChemCam laser, the SuperCam laser had to incorporate LIBS spectroscopy and a new Raman analysis function. Beyond the size restrictions, the teams have also significantly increased the instrument’s analysis capabilities. The SuperCam laser can produce 10 times as many shots in burst mode for faster sampling — 1,000 shots per burst, compared to a maximum of 100 with ChemCam and at a frequency three times higher (10 Hz). The experience gained with the ChemCam laser coupled with Thales’s unique expertise in complex systems engineering enabled the company to complete the entire project in under three years.

Designing a laser for Mars means achieving an extremely high level of qualification to meet four key challenges: miniaturisation, resistance to impacts and vibrations during landing, resistance to the Martian environment, including temperature extremes from –50°C to +70°C, and of course dependability and service life. We wish Perseverance all the same success as Curiosity, which has fired its laser on Mars almost 900,000 times since 2012. Eric Durand, in charge of the SuperCam (Perseverance) and ChemCam (Curiosity) lasers for Thales.

Can Mars hide its secrets from the SuperCam laser?

SuperCam comprises five instruments: three spectrometers (LIBS, Raman, VISIR), a micro-imager to capture high-resolution colour pictures and a microphone to record the sound as the LIBS laser fires on rocks up to 13 feet (4 m) away. When plasma is formed, it creates a staccato ‘pop’. Recording it could provide further information about the nature of rocks, such as hardness and porosity. The Thales laser is designed to operate in both LIBS (laser induced breakdown spectroscopy) and Raman modes and is a core component of the SuperCam instrument’s two spectrometers.

In LIBS mode, an infrared beam (wavelength: 1,064 nm) is used to analyse rocks by laser induced breakdown spectroscopy. The powerful laser has a range of up to 7 metres and focuses energy of 30 mJ per pulse on an area of less than 1 square millimetre to evaporate rocks at about 10,000°C. The spectrum of light emitted by this plasma is then analysed to determine the sample’s chemical composition. LIBS can also be used to remove dust from rock surfaces to facilitate analysis by other instruments.

In Raman mode, the laser emits green light (wavelength: 532 nm) with a range up to 12 metres to analyse the mineral composition of rocks. By vibrating the bonds between atoms, the beam makes it possible to determine the mineral signature of matter, the way atoms are organised into molecules and how those molecules are bound together. With this technology, scientists will be able to characterise the molecular structure of minerals and also detect any organic molecules. The green laser will also be used to induce fluorescence in mineral and organic compounds, so that their constituent components can be determined with greater accuracy.

Where Curiosity proved that Mars could have supported life, Perseverance will go further, searching for signs that life actually did exist there in the past.

SuperCam will be operated from LANL in the United States on an alternating basis with the FOCSE centre at CNES’s facility in Toulouse. A control signal takes between 5 and 20 minutes to reach Mars.

Will we find samples of past or dormant life, or even active life in Jezero Crater, which was fed by a river and flooded with liquid water 3.5 billion years ago, when life first appeared on Earth?

Will samples of Martian life be returned to Earth in the next 10 years on the Mars Sample Return mission? Will we find the resources needed for humans to live and work on Mars? And through Mars, which unlike Earth has no plate tectonics, will we learn more about the origins of life on our own planet — a part of human knowledge still shrouded in mystery? The Mars 2020 mission is of historic importance!

For more than 35 years, Thales has been recognised as a world leader in the design, development and manufacture of high-energy nanosecond lasers for industrial applications and the most powerful Ti-sapphire femtosecond laser systems for leading scientific applications with a peak power of up to 10 petawatts.

Thales delivers the most reliable and intuitive products and offers a unique combination of technological expertise and robustness for industrial applications that require the highest levels of availability, such as laser annealing, laser liftoff, laser shock peening and cutting of composites for such sectors as aerospace, microelectronics and flat panel displays. The company also provides a full range of optimised services to support each customer.